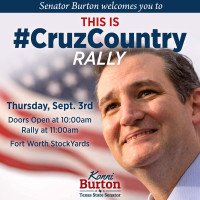 Senator Ted Cruz, Candidate for President, To Host a Home-State Rally in the Fort Worth Stockyards

FORT WORTH– With 17 Republican candidates currently running for President in 2016, it is important for GOP supporters to get to know the candidates who are competing for the nomination. North Texans will have their first opportunity to do this when U.S. Senator Ted Cruz returns home to Texas on Thursday, September 3rd for his “This is #Cruz Country” campaign stop.

The Fort Worth rally will be the first of three events he will host that day, followed by stops in Tyler and Kingwood. Hosting Senator Cruz in the Stockyards will be State Senator Konni Burton (R-Colleyville). Burton, who was an early supporter of Cruz’s run for US Senate and one of the first to endorse his Presidential run commented on the announcement of the event, “I know Texans, especially up here in SD 10, are excited about Sen. Cruz’s momentum in the Presidential race. I have no doubt he will have a big welcome home to Texas when he arrives at the Stockyards next week.” Cruz was also a key supporter of Burton’s run for the Texas Senate, providing a coveted endorsement for Burton in a crowded GOP primary.

Throughout his two years as Senator, Ted Cruz has been a strong voice for the American people on Capitol Hill. This rally will provide Texans with the opportunity to hear first-hand the values and goals of Ted Cruz as a presidential candidate.

Senator Konni Burton welcomes Senator Cruz to Texas Senate District 10 as the event will take place in the historic Fort Worth Stockyards. Doors open at 10:00 a.m. with the rally beginning at 11:00 a.m. and concluding by noon. Entry and parking will be free. RSVP here.

Please join Senator Cruz and hundreds of fellow Texans during this special event to ensure an educated Texas electorate can put a conservative official in the White House to redirect America on its path of life, liberty, and the pursuit of happiness.