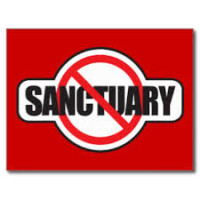 Today, Governor Greg Abbott sent a letter to Dallas County Sheriff Lupe Valdez boldly proclaiming that ” ‘Sanctuary City’ policies like those promoted by [her] recent decision to implement [her] own case-by-case immigrant detention plan will no longer be tolerated in Texas.”

In no uncertain terms, Governor Abbott declared that sanctuary city policies in Texas pose a real and imminent danger to our citizens. I could not agree more, and the state legislature must act next session to end this lawless practice. With Governor Abbott publicly joining Lt. Governor Patrick and conservative members of the Texas Senate, I feel certain that we will end the harboring of those in this country illegally by rogue municipalities.

I applaud Governor Abbott for his leadership on this critically-important issue. Also, if you did not have an opportunity to read the email I sent out about Governor Abbott’s recent decision against Planned Parenthood, you can check it out here.