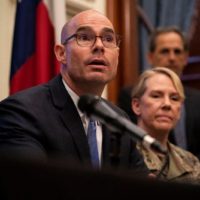 If you’ve been following Texas political news this week, you’ve likely seen that after months of controversy and political theater, Republican Texas Speaker of the House Dennis Bonnen announced he would not run for reelection.

In case you hadn’t heard, Speaker Bonnen met with grassroots leader Michael Quinn Sullivan of Empower Texans shortly after the session ended. It was during that meeting that Bonnen asked Sullivan to focus on primarying ten of his own Republican House members and in return, Sullivan’s organization would receive House press passes — a quid pro quo.

It was a private meeting with only Sullivan, Bonnen and House Rep Dustin Burrows attending. However, months later, Sullivan went public and accused Bonnen of that quid pro quo. Other specifics came out as well, in a blog post Sullivan wrote regarding their meeting. Bonnen wasted no time publicly denying the offer and also claimed that many of the specifics Sullivan relayed were lies themselves.

That was, until a recording of the meeting was released to the public — confirming everything Sullivan had claimed and exposing the lies Bonnen had so adamantly defended.

Because of that, Bonnen’s castle quickly began to crumble and this past Tuesday, Bonnen announced he would not seek reelection to House District 25.

What were those lies, exactly? I’m glad you asked.

Bonnen wrote in an email to members after the controversy broke:

“Let me be clear. At no point in our conversation was Sullivan provided with a list of target Members.”

Bonnen sent a letter to Sullivan after their meeting, in which he said:

“No offer was made to you of any kind, and thus, there is nothing for you or anyone associated with you to ‘reject.’”

“If we can make this work, I’ll put your guys on the floor next session.”

LIE #3: NO CAMPAIGNING AGAINST INCUMBENTS

Bonnen, back in May of this year, told the press he would not campaign against any sitting member of the House, whether Republican or Democrat.

Bonnen on recording: “…Travis Clardy and Phil Stephenson, and I don’t want to go any further down that list.”

“And let’s go after these Republicans… we beat some of these liberal pieces of sh**, take people out, and we maybe flip a couple of these primaries, better R’s, kick my ass if we’re not doing a better job.”

Blatant deceit. By the Speaker of the House.

And for that, I first want to thank Michael Sullivan for exposing Bonnen for the deceitful operator that he clearly is. I also want to thank all the strong state representatives who didn’t disparage the messenger, but rather listened to the audio to determine the truth and then denounced Bonnen without hesitation. Thank you.

And most importantly, I want to thank all of you strong, principled, grassroots conservative activists who held Bonnen’s feet to the fire with loud demands to step down and earnest calls to your elected officials asking that they pull their support from a corrupt leader.

You demanded integrity and honesty and you won. I couldn’t be any prouder of each and every one of you.