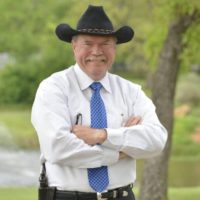 You may have seen that Tarrant County Sheriff Bill Waybourn is the latest victim of gross misrepresentation by the media.

Shocked? Of course not. After all, it’s the left of center media combined with a Republican Sheriff making a statement on illegal immigration — an issue that instantly incites unfounded accusations of racism and bigotry from those on the left.

Sheriff Waybourn, who has consistently demonstrated a strong stance against illegal immigration, was invited to speak at a press briefing with Immigration and Customs Enforcement (ICE) Director Matt Albence at the White House this week.

The sheriff, wearing his trademark cowboy hat, spoke eloquently for four minutes on the issues facing Tarrant County in relation to illegal immigration. He finished his statement and stepped back behind the podium.

Within minutes, stories began to pop up claiming Waybourn had made a sensational, blanket statement referring to illegal immigrants as “drunks” who will “run over your children.”

But, unsurprisingly, this is not what the Texas sheriff said. At all.

Waybourn was referencing a California ruling challenging how long illegal immigrants can be held in detention, and provided context for his home county. Specifically, he was talking about repeat DWI offenders in the context of illegal immigration.

“Of those people we have in custody, we know for a fact that 72 percent of them are repeat offenders, so if we have to turn them loose or they get released, they’re coming back to your neighborhood and my neighborhood. These drunks will run over your children and they will run over my children, and if that happens I know that you will want and certainly I would want for you the full force of the law.”

But that didn’t stop the mainstream media in Texas from instantly running with a narrative that made Waybourn out to sound “racist.”

The Texas Tribune was the first out with a headline that read, “Texas sheriff says migrants are ‘drunks’ who will ‘run over your children.'” The story was paired with social media copy that took another quote from Waybourn, out of context: “‘That’s who we’re trying to eliminate out of our country.'” They later deleted the tweet and posted a corrected one with the corrected story. But by then, the damage had been done.

The Fort Worth Star-Telegram immediately followed suit with a headline that read, “Sheriff: If migrant DWI offenders released, ‘these drunks will run over your children.'” Their editorial board later published an op-ed that tried to walk back this narrative while simultaneously serving a backhanded blow to Waybourn: “Tarrant sheriff didn’t bash all immigrants as drunks. But he should be more careful.”

And finally, even the next morning, though the Tribune had already issued a correction and there was plenty of time for the Houston Chronicle to actually listen to Waybourn’s words, they still continued with the same false narrative with a headline that read, “Texas sheriff speaking at White House calls migrants in his jail ‘drunks’ who will ‘run over your children.'”

This is complete insanity, and I for one am so sick and tired of media who habitually misrepresent the truth in order to further their precious narrative — one that perpetuates rampant leftist ideas and propagates their ideology.

And that is exactly why I founded The Texan.

Fortunately, because we exist, we were able to immediately respond with an article of our own that correctly represented exactly what Waybourn said.

Thank goodness we finally have a media organization here in Texas that reports the facts and doesn’t perpetuate a leftist agenda with narratives and spin! If you’re as disgusted as I am with the media here in our state, please stop subscribing to them or clicking on their stories.

Make today the day you subscribe to The Texan. We are committed to providing you with news you can trust, without the liberal bias.

We fight fake news. Join us today and get your first month completely free!