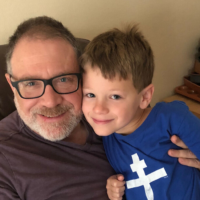 The biggest story in Texas over the last few weeks has been the ongoing custody battle over 7-year-old James Younger and his mother’s desire to transition him from a little boy to a transgender girl.

For those who haven’t heard this story, Anne Georgulas has argued for years that her son believes he is a transgender girl and has proceeded to refer to him as a girl named “Luna” and dressed him in girls’ clothing.

Jeff Younger, James’ father, disputes her claim by arguing that his son does not want to be a girl, but instead identifies with his biological sex and chooses to wear boys clothing when he’s with him.

Whether James views himself as a girl now or not, the fact that this child’s future could be so quickly and recklessly determined based on his sentiments as a 7-year-old, or worse, the unfounded preference of his mother, is absolutely horrifying.

Though this custody battle has waged for months, James’ plight was ignored by the media.

As these battles go, the fate of James Younger would be determined in a Dallas courtroom. And because of its potential societal and legislative implications, The Texan made sure a reporter was there every day to report on this case. Daniel Friend diligently read through documents, attended court meetings, and spoke with the family. He reported fairly on a story that was sensitive and nuanced — one that we knew Texans needed to be informed about.

But still, crickets from liberal outlets — notably The Dallas Morning News, even though this was playing out in their own backyard.

The first decision was handed down by the jury, who sided with James’ mother. All that was left was for the judge to make her final ruling, and her liberal record didn’t indicate there would be much hope for Jeff Younger in maintaining joint custody of his son. The Texan reported on those developments in the story, just as had been done all the weeks prior.

That jury verdict, however, caused the story to gain traction on the national stage. Pundits like Matt Walsh and Ben Shapiro began talking about the story, and cited our reporting.

Our website was flooded with traffic — our work cited in a host of national outlets. All because we’d been there to tell James’ story, and did so without bias or spin.

In fact, our work was referenced so broadly that outlets from both the right and the left used our articles as reference points for their own reporting. People across the country, and from across the political spectrum, were reading real facts about the Younger case.

As a result, public outrage that a young boy could potentially be subjected to such life-altering treatment and abuse at the hands of his own mother inundated social media. The attention the case gained resulted in an incredible amount of pressure on Judge Kim Cooks as the date of her final ruling approached.

Finally, the judge defied the decision leveled by the jury and ruled that both parents would maintain joint managing conservatorship, and Jeff Younger would now have a say over all medical, dental, and psychiatric care for James. This meant that in order for the use of puberty blockers or other facets of a “medical transition” to occur, both parents would have to consent.

Because The Texan simply exists, factual information about an incredibly important issue was provided to readership from every political persuasion and not only within Texas, but across the country.

Because we faithfully followed the story, the public became privy to the plight of a young boy, and were then able to speak out on his behalf.

Because of the support from readers like you, we were able to tell James’ story.

This is why I founded The Texan — to tell the stories that are blatantly ignored by mainstream media outlets who would rather they go unnoticed.

Why? Because they do not see these stories as newsworthy. And why is that? Because they see nothing “strange” in a mother who thinks her son should decide at the age of seven which gender he is — even though he was biologically born a boy.

In a nutshell? The media is the left.

But we cannot continue to fight the liberal media, nor continue to tell these stories that are important to all Texans, without you. So please consider subscribing today! You can get started with a free month of unlimited access by clicking on this link.