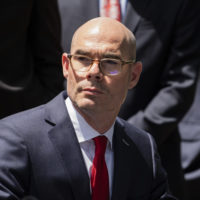 Last week I found myself more dismayed every passing hour as I saw the entire media-industrial complex devote hours and hours to the political theater/elder abuse that was Robert Mueller’s testimony on Capitol Hill. Perhaps it would have been one thing if there was something new being said, but instead America was treated to a clearly exhausted bureaucrat telling elected officials to essentially, “read the book.”

Seeing the attention devoted to that circus made me want to pull my hair out.

Washington D.C. matters, obviously, but the amount of energy our political media—and many citizens—devote to it, compared to the state and local issues that determine so much of our quality of life, is completely out of proportion.

National media organizations work hard to keep us outraged over the next smoking gun that will surely, this time, take down the President. And too many fall for these diversions.

And while these distractions at the federal level abound, our elected officials and the news media at the state and local level are engaging in grotesque violations of the public trust every day.

If your media feeds have allowed something other than Trump tweets and Mueller news in front of you the past few days, you will have learned that Texas is going through a seismic political event that could reshape Texas politics for the next legislative session and potentially beyond.

Michael Quinn Sullivan is the CEO of Empower Texans, which is an organization that works to help average citizens hold their elected officials accountable to individual liberty and free market principles. He dropped a bomb this past week by openly accusing the Speaker of the Texas House, Dennis Bonnen, and the Chairman of the Ways and Means Committee, Dustin Burrows, of offering a quid pro quo in a meeting the three had together in the Speaker’s office. Sullivan alleged that Speaker Bonnen offered Empower Texans coveted House press credentials if Sullivan’s group would work to defeat the Speaker’s own Republican House members in their primary elections.

Speaker Bonnen denied the claim. Interestingly, that’s when so many left of center media here in Texas were swift to believe Bonnen over Sullivan. But why? At that point, there was no corroborating evidence for either man. It was only he said/he said. Isn’t journalism about reporting the news, not taking sides? Particularly when there’s no evidence to prove or disprove either?

Then another bombshell was dropped by Sullivan. He had a recording of the meeting. After that, amazingly, media outlets turned to shooting the messenger—Sullivan—by claiming that it was journalistic malpractice to record a conversation with a politician. Even worse, the first editorial from the Dallas Morning News about this scandal was about how this incident proves that Empower Texans should be run out of town. Why would they be firing on Sullivan rather than questioning the ethics of a quid pro quo by a sitting Texas House Speaker? It should be noted, that this editorial by the DMN was published hours after two House members had listened to the recording and vouched for Sullivan’s account of the meeting.

The backwardness of all this would be funny if it wasn’t such an indictment of the entire establishment political media in Texas. We all know why this incident has played out as it has within our media here in Texas. They are left of center and the more conservative you are, the more hostile they become toward you. We’ve all seen it and felt it, time after time.

The Texan is here to fix that. We are doing substantive reporting on the real issues facing Texans, without being hostile to your worldview. But most importantly, we report on the news as it happens—with objectivity. We don’t push a narrative; we give you the facts and allow you to form your own opinion.

If you think this mission of ours is important, please subscribe to The Texan today. Then invite five people you know who are also dissatisfied with political media in this state to sign up too. So many Texans feel disrespected and marginalized simply because of their right of center worldview. The Texan embraces it, while keeping you informed.

Get 15% off by purchasing an annual subscription for $90.