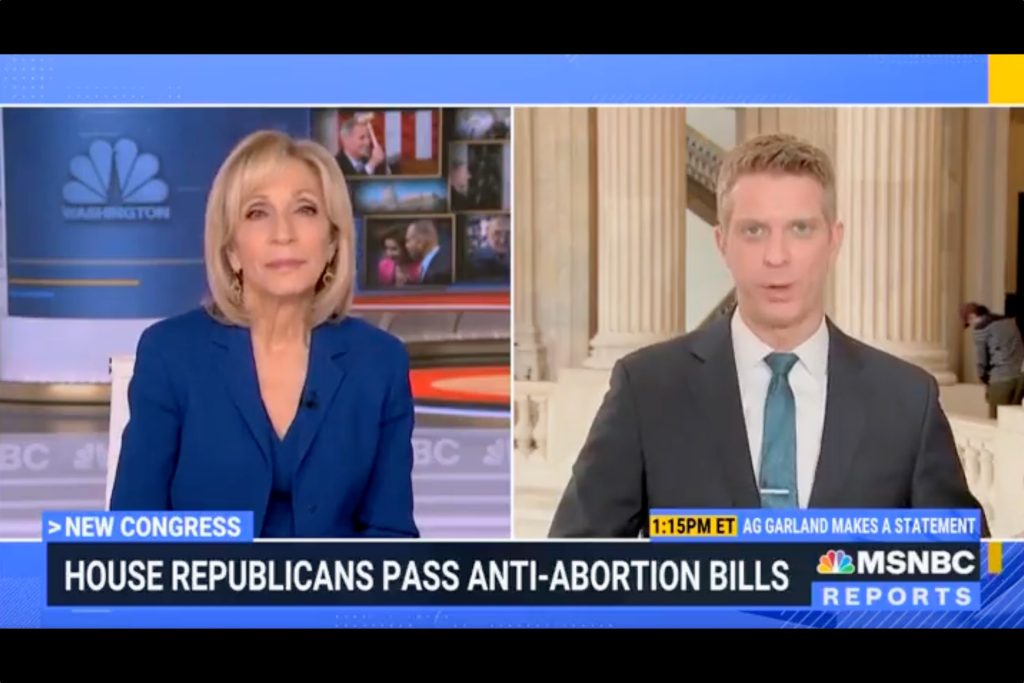 George Orwell wrote in his best-selling novel 1984, “Don’t you see that the whole aim of Newspeak is to narrow the range of thought?”

By limiting the range of language, more limited is the ability for men to express their thoughts. While we do not live in Orwell’s dystopia – yet, the consequences of human nature he allegorized can be seen in many places.

Andrea Mitchell chides a reporter for using the term "pro-life"

"Let me just interrupt and say that pro-life is a term that they—an entire group wants to use, but that's not an accurate description."

Reporter: "I’m using it because it’s the term she used to describe herself." pic.twitter.com/fdh3FLouz5

“Garrett, let me just interrupt and say that ‘pro-life’ they made — that an entire group wants to use,” Mitchell states. “But that is not an accurate description.”

Not an accurate description?!

Since when was Andrea Mitchell’s place to decide what a long-established, well-known movement of people call themselves. This isn’t a case of a cobbled-together group grabbing hold of a nameplate to which they have no claim! “Pro-life” has been in the American political lexicon for decades.

But now Andrea Mitchell — in her infinite wisdom, bound by an equally infinite egoism — has decided that is no longer appropriate. Tell me, what SHALL we call the group of people opposed to the ending of life, or at the very least potential life in the womb?

Don’t worry. The busybodies at the Associated Press (AP) have us covered!

“Use the modifiers anti-abortion or abortion-rights; don’t use pro-life, pro-choice or pro-abortion unless they are in quotes or proper names,” our benevolent language overlords finger-wag. Notice how “anti-abortion” is not paired with its linguistic opposite, “pro-abortion”?

You’d think the people in charge of directing the practices of the vast majority of the journalism industry would cling to some semblance of intellectual consistency.

But no, it’s thrown into the dustbin along with the meaning of the word “woman,” which the AP has decided is virtually meaningless.

The correct way to approach this issue and these groups is to call them what they call themselves. “Pro-life” and “pro-choice” are both what these groups prefer and its descriptive of their positions on the issue of abortion.

The media is supposed to report — not make itself a part of the political game. The sleight of hand Mitchell and the AP deploy only discredits their ability to accurately describe what is happening.

At The Texan, we don’t partake in this nonsense.

We have our own style guide in which we refuse to allow these kinds of absurd, Orwellian edits of the English language. The AP Stylebook is not entirely infected with biased tripe like this, but the infection is spreading.

Subscribe to The Texan for reliable, fact-based reporting that uses the English language as it’s meant to be used — not twisted beyond recognition as a means to a narrative end. We don’t have to be living in 1984 to see the similarities where they exist.

Is the legacy media really serving up a worthwhile product?

I don’t think so, and it gets worse every day.

Cowboys outside a thatched roof shack in (or near) Barstow, Texas. Circa 1900. Stunning detail. You've gotta love those chickens! From the Lawrence T. Jones Texas Collection at SMU's Degolyer Library. You can browse this fine collection here: https://www.smu.edu/libraries/digitalcollections/jtx

Joe Biden has sent a powerful message to our enemies that the United States WON’T HESITATE to shoot down enemy spy vessels once they finish recording our entire country. 🤦‍♂️

Wow, I am of Asian heritage, my mom was a Filipina! One would think with a platform like yours you would have an obligation to not use race or the color of my skin but instead interject equitable examples in your post! This country doesn’t need more fuel on the flames of division https://twitter.com/electmikeharvey/status/1621973975965343745

@RobSchneider Wow, with a platform like yours, one would think you would have an obligation, to interject equitable examples in your post. Are you the average white male @RepMTG was rambling about in her monologue? This country doesn’t need more fuel on the flames of division.