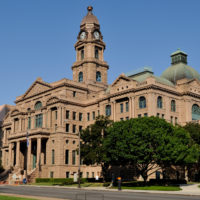 Tarrant and Dallas counties are just two of the taxing entities that just raised their rates, joining a bevy of other cities and counties that have voted to do the same before the new legislation limits their ability to raise taxes without voter approval.

While the state passed legislation to cap rising property tax rates, it’s important to remember that it is your school board, city council, mayors, county judges, and commissioners who actually set the rates and therefore determine your property tax bill. Your county appraisal districts appraise the value of your home or business and then local taxing entities vote on whether to adjust your tax rates.

Don’t let local electeds, like Republican Tarrant County Judge Glen Whitley, fool you with their “the state doesn’t fund education enough!” argument to justify continually voting to raise your taxes either. That isn’t how it works and shows budgeting ignorance. Whitley and others should know this and frankly, if they don’t, they need to be voted out of office.

Education funding is a shared responsibility, and the local tax collections go to the ISDs first, then — and only then — does the state come in to supplement with funding to make it whole.

Unfortunately, elected officials who obfuscate with that excuse want to pull the wool over the eyes of taxpayers, so they tax businesses and homeowners more each year, and then turn around and blame the state legislature for doing it. Insanity.

The problem is not that they don’t have enough money, it’s that they spend too much.

Fortunately, in this increasingly tax and spend mentality of local governments, there are diamonds in the rough! For instance, the city of Colleyville’s Mayor and city council have shown their pro-taxpayer bonafides with their actions, not just words. For the second year in a row, they’ve lowered the city tax rate, so residents in Colleyville not only have a lower rate than last year but low enough to offset increases in appraisal values. Kudos to them!

Sadly, too many liberal local governments, made up of Democrats and “Republicans,” continue to tax and spend without recourse. That’s why it is so important that we know who our local officials are, and hold them accountable for their actions.

So, wherever you live, find out if your city or county is taking advantage of the time between now and January 1 to raise your taxes to their highest levels before state restrictions are placed on them. And if you haven’t considered supporting uniform election dates, please do. This would mean that local elections and state elections would fall on the same day, and cause turnout for these traditionally less flashy but equally important local elections to increase dramatically.