Fort Worth, TX – Today, Senator Konni Burton (SD-10, Tarrant County) is proud to announce her invitation to participate in the Faith and Justice Fellowship, which is a partner organization of Prison Fellowship, a national nonprofit organization founded upon the belief that a restorative approach to prisoners, former prisoners, and all those affected by crime and incarceration can make communities safer and healthier. The Faith and Justice Fellowship is a bipartisan commitment to prioritizing and advancing restorative values in criminal justice reform.

“I am extremely honored to have been asked to be a founding member of the Faith and Justice Fellowship,” said Sen. Konni Burton. “I strongly believe in their mission to build, inform, and inspire a movement of policymakers and voters who believe human dignity and redemption should be represented in our national dialog on criminal justice.”

Members of this initiative will share ideas and best practices for supporting and advancing justice reform which transforms those responsible for crime; validates victims; and encourages communities to play a role in creating a safe, redemptive, and just society. Additionally, members are not obligated to support or oppose any specific legislation.

“I believe criminal justice reform is a fantastic opportunity for common ground amongst Democrats and Republicans,” continued Sen. Burton. “I am excited to join with reform leaders across the nation and find solutions which promote liberty and protect citizens. Our criminal justice system is not dissimilar from any other government system; it should be thoroughly examined and revitalized regularly with new ideas and innovations. I’m ready to get to work.”

The following are the founding members of the Faith and Justice Fellowship: 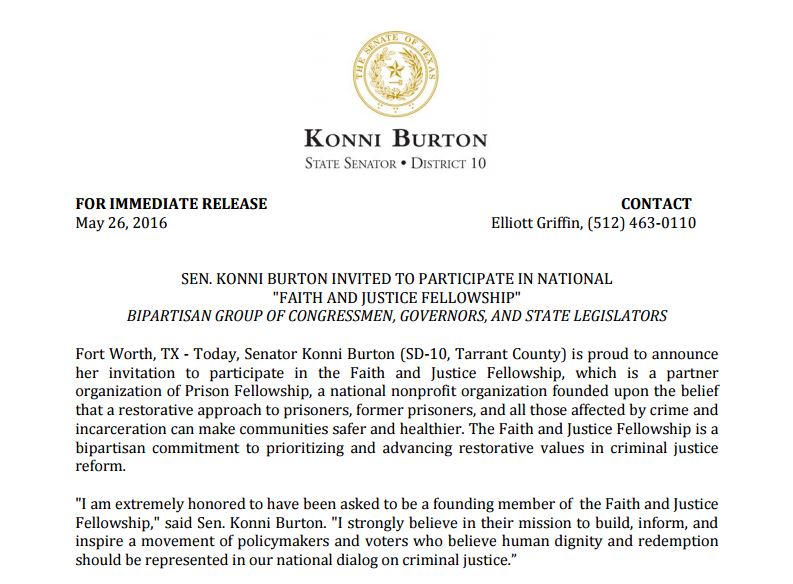