Fort Worth, Texas – Today, Senator Konni Burton commends the leadership of Fort Worth Police Chief Joel Fitzgerald for his directive to audit the Crimes Against Children Unit and eight other investigative units within the department. His proactive response came after a discovery from a recent case that the victims came through the system 10 years ago, and no punitive action was taken against the perpetrator at that time.

In a move which will both protect future child victims and safeguard the integrity of the Fort Worth Police Department, Chief Fitzgerald is asking an 11-member task force to review all cases in the Crimes Against Children unit to make sure no others were mishandled.

“Law enforcement plays such an imperative role in the protection of those who cannot help themselves, especially in the area of victims of child abuse and neglect. The victims, the community, and the state rely on the police to identify abusers and violators and bring justice when it is not only due, but absolutely necessary, “ stated Sen. Burton. “Chief Fitzgerald is taking steps to ensure his police department has not and will not fail other child victims.”

Corrective measures in any organization are best left to its leadership, rather than from a regulatory or governing body. Senator Burton supports Chief Fitzgerald’s serious response to this unfortunate situation and anticipates the findings of the task forces’ efforts in early fall. 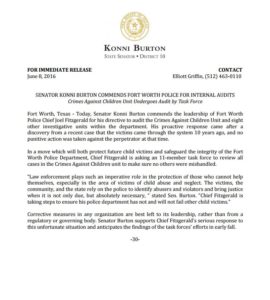