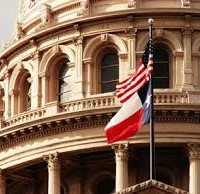 By Mike Hailey
Capitol Inside Editor

Tea party activist Konni Burton picked up more steam Wednesday in a Texas Senate bid when U.S. Rep. Kenny Marchant pitched his support behind her campaign in a move that appeared to catch some Austin lobbyists and the state’s business establishment by surprise.

Burton, who also has a long list of fellow tea party leaders in her corner, has been attempting to stake an indisputable claim to the conservative banner in a crowded field of primary contestants in the battle for the Fort Worth-area seat that Democratic State Senator Wendy Davis is giving up so she can run for governor instead this year.

But Marchant’s endorsement threw a new twist into the Senate District 10 contest as a result of the fact that the Republican congressman hasn’t intervened that often in GOP primary fights and has enjoyed relatively strong support from business interests who haven’t been that enamored with tea party politics.

Burton’s first-round opposition includes Mark Shelton, a Fort Worth physician who served two terms in the Texas House before falling short in 2012 in a bid to unseat Davis in the Republican-leaning Senate District 10. Arlington school trustee Tony Pompa, Colleyville chiropractor Jon Schweitzer and former Colleyville City Council member Mark Skinner are seeking the right to represent the GOP in the general election in SD 10 as well.

A pair of Fort Worth Democrats – Mike Martinez and Libby Willis – are doing battle with Colleyville attorney George Boll on their side of the aisle in the race to replace Davis. Willis – whose father Doyle Willis represented Tarrant County in the House and the Senate – appears to be the frontrunner for the Democratic nomination in the fight for the seat that Davis won initially in 2008.

The Democratic primary competition in SD 10 has featured more open warfare with local party leaders attempting to portray Boll as a candidate who can’t be trusted based on the fact that he’s voted more in recent primary elections as a Republican than he has a Democrat. The Republicans in the running for the Senate seat have focused more of their fire on President Barack Obama and Democratic leaders at the national level.

But Burton entered the Senate race last year when it appeared that the Democratic incumbent would be seeking re-election in a district where she’d defied partisan voting trend odds in her first two campaigns for the seat. So Burton, who’d been part of a tea party delegation that pushed for conservative causes in Austin during the legislative sessions last year, had a head-start on her Republican rivals by the time Davis launched a gubernatorial bid last summer in the wake of a highly-publicized filibuster against an abortion restrictions bill.

Marchant is the second elected official to rally behind Burton with an official endorsement in her campaign for the upcoming opening in the upper chamber of the Legislature. Marchant served a dozen years in the Texas House where he led the GOP Caucus before winning a congressional seat in 2004 in a district that’s currently stretched across three counties in the Dallas-Fort Worth area.

Almost half of Marchant’s constituents are Dallas County residents while slightly more than one-third live in Tarrant County with the remainder in Denton County. But the swath of Tarrant County that Marchant represents has more Republicans per capita than the rest of his district with a large concentration in suburbs like Colleyville and Bedford that overlap with the Senate district that Burton hopes to represent at the Capitol next year.

Burton has been generally regarded as a slight favorite in the GOP primary fight in SD 10 as a result of a growing list of conservative supporters like Marchant. While U.S. Senator Ted Cruz of Texas hasn’t taken sides officially in GOP primaries in his home state so far this year, he gave Burton an enthusiastic plug last year in a radio interview when the SD 10 primary field was just starting to shape up.

But Burton’s chances for an outright victory in the March 4 election may not be that good in light of the sheer number of competitors she facing in round one. A primary runoff will be required if no candidate secures at least half the votes in the initial election in less than two months.