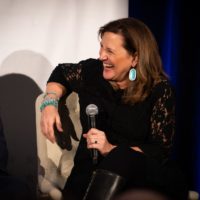 Last week, the Texas Public Policy Foundation hosted their annual Policy Orientation, and I was invited to be on one of their panels titled “Telling the Texas Story: Do Media Narratives Portray an Accurate State of the State?”

I was honored to have been asked to join the discussion, as I have much to say on this subject! As many of you already know, I have long been a critic of main-stream media outlets and the narratives they push, so this was a topic I was looking forward to discussing.

The moderator started out the panel with the specific question of whether media narratives portray an accurate state of the state. I answered with a definitive “no” adding, “and that’s why we launched The Texan.”

Sherry Sylvester continued, “The Texas press is different. This has never been a competitive environment…If you don’t have any competition, you don’t do any innovation…”

When all media outlets are left of center, and all have an increasingly group-think perspective, and no competition, why change?

Throughout the course of the panel, I brought up a myriad of stories where Texas legacy media outlets had pushed a narrative, rather than just report the facts of a story.

One of the worst that continues to anger me is the pile on of Tarrant County Sheriff Bill Waybourn by Texas media which was started by The Texas Tribune, accusing him of making the blanket statement that illegal immigrants are “drunks who will run over your children.” That narrative went viral nationally — within minutes. Fortunately, The Texan, after speaking directly with Sheriff Waybourn, wrote a factual story regarding his comments.

Additionally, I brought up the incident between Texas Speaker of the House Dennis Bonnen and Second Amendment activist Chris McNutt, in which McNutt was accused by Bonnen of aggressively approaching the speaker’s house while his family was at home and brandishing a weapon. Texas media was more than happy to recount Bonnen’s story as fact. Why wouldn’t they? After all, there’s a narrative to keep alive when it comes to gun rights activists!

The Texan, however, got ahold of the DPS dashcam footage and published it along with the timeline of accusations and McNutt’s side of the story — and by the way, the dashcam video completely exonerated McNutt and proved that Bonnen’s account was a lie.

But what was absolutely astonishing is what happened after I told the whole story regarding Bonnen and McNutt on the panel. Bob Garrett of The Dallas Morning News, then started talking about that same story and literally described it as, “the Dennis Bonnen stalking thing!” I had just refuted Bonnen’s side of the whole story and Garrett still called it a “stalking” story.

The blatant disrespect for the details of the story and the reputation of an innocent man was astounding.

Moments like these only solidify my resolve to continue our work at The Texan to ensure Texans have reliable, factual reporting that informs readers rather than the narrative pushing we’ve all grown so tired of.

The Texan is the competition that the media has so desperately needed for decades.

If you haven’t subscribed to The Texan yet, I’d encourage you to make today the day you do. We don’t take money from advertisers or donors; we’re accountable directly to our subscribers. We can only continue to tell the whole story, the real story of Texas, because of the support of our subscribers — the way it should be.