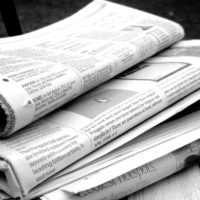 As you may have seen recently, the McClatchy Company, the second largest newspaper publisher in the country, filed for bankruptcy.

One of the country’s largest legacy media conglomerates, boasting ownership of over 30 newspapers, failed to make ends meet and sustain their business model.

So, another self-described guardian and purveyor of the “truth” is straining to keep its doors open. Maybe it’s because this so called “truth” they claim to purvey is less factual reporting and more one-sided narrative pushing and we have just had enough?

Speaking of having enough, one of the 30 newspapers that relies on McClatchy for its operation and publishing is none other than Tarrant County’s own Fort Worth Star-Telegram, a publication which is no stranger to liberal narrative pushing itself.

Whether it’s topics such as the second amendment, border security, healthcare, or abortion, anyone who’s read the Star-Telegram for any length of time knows which way they lean politically.

The Star-Telegram released the following statement regarding the bankruptcy filing: “The Fort Worth Star-Telegram is operating business as usual. Our readers and subscribers can continue to rely on us for strong independent local news that is essential to our community.”

Essential to our community? I’m guessing they mean the community of left-of-center readers who like to have their own worldview validated? Does the Star-Telegram consider Republicans a part of this community? After all, Tarrant County is one of the nation’s largest Republican counties.

The truth is, so many of us have seen this demise coming for years. Major legacy media outlets all over Texas have gradually, then suddenly, become hostile to the worldview and perspective of right-of-center voters. The liberal group think that is so prevalent in the world of journalism is so obvious that it’s resulted in the loss of trust among many Texans and Americans.

But instead of employing a business mindset that seeks to adapt to market changes within the industry, and one that respects their consumers viewpoints and perspectives, mainstream media has consistently clutched their pearls over the state of their declining readership.

They’ve not only clung way too long to their traditional business model of labor intensive print newspapers that deliver day old news, but they’ve also stubbornly clung to their one sided “reporting” of news that doesn’t even pretend to understand the political perspectives of over half of their readership. Their opinion pieces and editorial board endorsements continue to insult and alienate consumers.

So it didn’t surprise me that a recent study found that since 2004, newspapers have lost 47% of their newsroom staff, and 20% of newspapers have closed their doors. That’s approximately 1,800 newspapers shut down in the last 16 years — all across the country.

I hear over and over from Texans who’ve had it with their local paper and who either long ago stopped getting them or are currently dropping them.

So, I think it’s fair to say there are many of us who were unsurprised by the news of McClatchy’s bankruptcy.

I started The Texan, an online, subscription based, straight-news publication with a staff of policy and political experts to fill this void that so many Texans are acutely aware of. Our team of reporters follow political stories around the state, including the biggest developments right here in Tarrant County, and we do it with factual reporting and no narrative pushing.

Whether it be our coverage of the beleaguered Panther Island Project, competitive primary races like congressional district 12, or Texas house district 92, developments in the life support case surrounding baby Tinslee Lewis, or how Tarrant county is combatting human trafficking, The Texan is the antidote to biased legacy media outlets who ignore the pleas of customers who just want fact based reporting — and who are going out of business because of it.

No ads. No donors. No editorial board. No endorsements. Just the facts.

If you haven’t already, subscribe to The Texan today. We are responsive to you, not to an out-of-state conglomerate, or advertisers, or liberal donors. And subscribing today helps us ensure we’ll still be here 10 years down the road, providing Texans with the news they need to know to make informed decisions for their state.