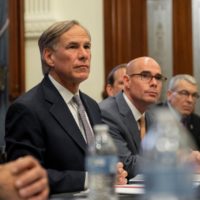 In case you missed it, The Texan broke the news last week that Governor Greg Abbott became the first governor in the country to opt out of the refugee resettlement program after President Trump’s executive order allowed such a move.

In a letter to Secretary of State Mike Pompeo, Abbott said, “the state and non-profit organizations have a responsibility to dedicate available resources to those who are already here, including refugees, migrants, and the homeless – indeed, all Texans.”

Abbott also cited the crisis at the border as a reason for the move, stating “Texas continues to have to deal with the consequences of an immigration system that Congress has failed to fix.”

Immediately, newspapers across the state harnessed the power of their editorial boards and absolutely berated the governor over his decision. In fact, a headline from The Hill literally read, “Texas’s largest newspapers blast governor for rejecting refugees under Trump order.”

And blast they did. Here’s a look at the headlines that followed the announcement:

“A rejection of refugees – and values”
— The San Antonio Express-News

“Texas is the only state to turn its back on refugees, and we should be ashamed”
— The Dallas Morning News

In a follow up to the refugee resettlement story, written by our very own Sarah McConnell, data shows that not only does Texas have a history of welcoming refugees, but that for the last decade, Texas has settled more refugees than every other state in the nation.

It’s worth mentioning that in spite of last week’s constant attacks from liberal media, Governor Abbott still boasts an impressive 65% approval rating from Texans. If that doesn’t go to show how out of touch these editorial boards are with Texans, I don’t know what will.

And remember, these are the same editors who decide what stories their outlet will print and from what perspective they’ll tell them. Never forget that.
Do you still pay for a subscription to one of these liberal legacy media outlets? If you do, you need to ask yourself “why?” and then cut the cord! The Texan is the alternative you’ve been searching for.

In fact, we’re running a “campaign cancel” promotion right now. If you unsubscribe from that archaic newspaper that you’ve subscribed to for far too long, we’ll give you three free months of unbiased, editorial-free news from The Texan.

We don’t have an editorial board who aspires to tell you what or how to think, and I can promise you we never will. We just do what news outlets are supposed to do — provide you with factual, unbiased reporting of current events so you can form your own opinions.

If you haven’t already, make today the day you support real journalism in the state of Texas. Subscribe to The Texan today!