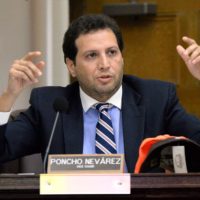 Direct Action Texas released an affidavit which detailed the incident, and it wasn’t long before the news spread like wildfire.

According to the affidavit, Nevárez, a Democrat from Eagle Pass, was caught on video exiting his private plane and dropping the envelope before he entered his chief of staff’s car and left the premises.

And the kicker? The envelope carrying the packets of cocaine was marked by his official state letterhead — and was labeled with his name.

Two Texas Department of Transportation Employees picked up the envelope and reported it to authorities, and DPS officers began an investigation. Although the public found out about this on November 13th, the incident itself actually happened back in September. Interestingly, it was only after the story went public last week that a warrant was issued for Nevárez’s arrest.

The disgraced state representative then turned himself in to the authorities. He posted his $10,000 bail and was released the same night.

Nevárez came forward and said he would seek treatment, and stated, “I do not have anyone to blame but myself.”

Are you ready for another kicker?

Nevárez serves as the chairman of the Homeland Security and Public Safety Committee in the Texas House.

You read that right. Nevárez, who was just booked on felony charges, chairs the committee that oversees all matters relating to public safety, including border security and law enforcement.

In fact, here’s a list of the agencies under Nevárez’s purview:

Additionally, he’s the vice-chair of the Select Committee on Mass Violence Prevention and Community Safety, which was formed in the wake of the El Paso and Midland-Odessa shootings.

And yet, Nevárez has not been stripped of his committee appointments, in spite of three chairmen (Reps. Jeff Leach, Phil King, and James White) who rightly stepped forward and called for Speaker Bonnen to remove Nevárez from his positions.

Bonnen, who recently went through a scandal of his own and now will not be running for reelection, responded with a letter stating that House Rules did not grant him the power to remove a chairman, even though the rules he cited as part of his reasoning don’t apply to that situation at all.

As a matter of fact, the speaker is the only one with the authority to appoint or remove committee chairs.

So what gives? Why won’t the speaker use the authority he has to remove Nevárez from these powerful positions? If Nevárez truly knows he only has himself to blame, then why isn’t he taking responsibility and stepping down on his own? And why aren’t more legislators publicly calling for his removal?

Frankly, we need to expect more from our elected officials — even if that means simply speaking up.

We can simultaneously show grace to a person who has made mistakes while calling for justice and ethical behavior from those who are representing us. Contrary to what many in the legislature would have you believe, the two are not mutually exclusive.

Pray for your elected officials, but also hold them accountable. They absolutely need both.